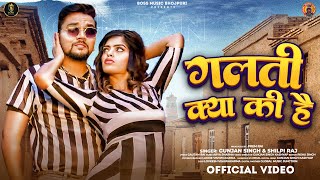 Bhojpuri Sunny Leone: Boss Music, the music company of Bhojpuri film producer Prem Rai, is releasing hit songs one after the other. On the one hand, Bhojpuri cinema’s songs communicate strongly to the people. Bhojpuri stars, on the other hand, release new songs every day. They make a fuss as they arrive. Galti Kya Ki Hai song features Bhojpuri Sunny Leone and Gunjan Singh, The official YouTube channel of Boss Music Bhojpuri has released one such song. In which Gunjan Singh, the Bhojpuri industry’s superstar, and actress Prachi Singh, the Bhojpuri industry’s Sunny Leone, are shown. The song’s lyrics are “Galti kya ki hai.”

Bhojpuri Sunny Leone: The audience loves Gunjan Singh’s new song’s humorous lyrics and is having a great time with it. In the song, Gunjan is shown in the very sizzling style of actress Prachi Singh. The costumes worn by Prachi Singh and Gunjan Singh in the video also captivate the audience. The song’s chemistry between the two stars is certainly worth witnessing. Where Prachi tells Gunjan that if we married, we shouldn’t go to court; instead, tell me what I’m missing. Gunjan chuckles and says, “I made such a mistake that you are after me after washing your hands.”

Who is Cicely Tyson Daughter? Everything You Need to Learn about Joan Tyson