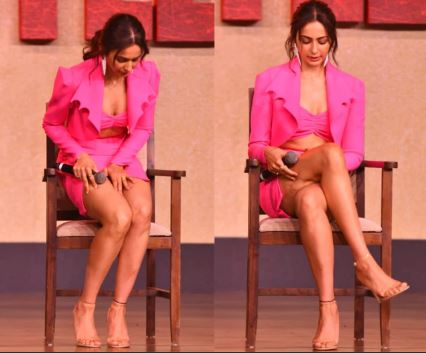 Rakul Preet Singh, a Bollywood actress, was recently spotted at the trailer launch event for her upcoming film ‘CuttPutlli.’ Rakul Preet’s look is going viral on social media at the same time.

Rakul Preet Singh is best known among her fans for her beauty and sense of fashion. The actress’s new looks go viral in a matter of minutes. Something similar occurred at this time. These new photos of Rakul were taken at the trailer launch event for the upcoming film ‘CuttPutlli.’ On the other hand, She appeared upset and uneasy in her dress at the time. According to the photos that have surfaced, Rakul Preet Singh arrived during this time to participate in a very bold style in a hot pink mini skirt.

This trailer was launched in front of a crowd of thousands of people. In such a situation, this actress could be seen constantly adjusting her dress. Rakul also became uneasy while sitting in the chair. Rakul Preet Singh, who moved to Bollywood from South films, is no longer concerned with her identity. She has shown the industry that she can transform into any character. Rakul rose quickly to prominence due to her outstanding acting abilities.

With her superb acting, the actress has enthralled audiences all over the world. Fans are now anticipating each of her films with bated breath. At the same time, the actress is the subject of much debate due to her appearance.