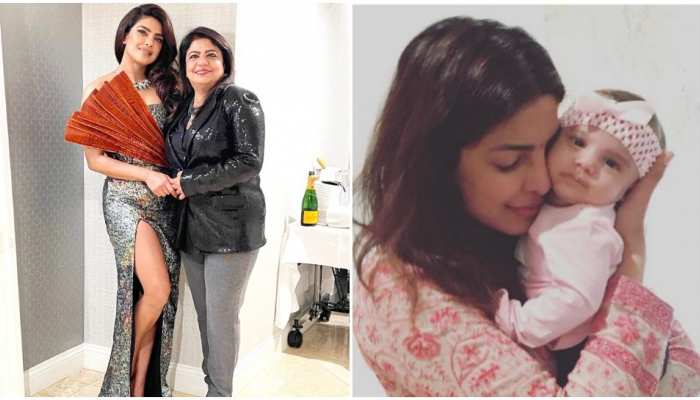 In January of this year, Priyanka Chopra and Nick Jonas welcomed their daughter Malti Mary Chopra Jonas via surrogacy. Nick and Priyanka, on the other hand, have decided to keep Malti away from social media and the paparazzi. For the past few months, Priyanka and Nick have frequently shared photos of their daughter hiding her face. Priyanka recently shared a photo of Malti with her ‘chhoti nani’ on her Instagram story. In which Malti is seen wearing a mesh dress with a matching hair band. Malti Mary Chopra Jonas is in the arms of her Chhoti Nani. Priyanka captioned the photo, “Love you chhoti nani.” She also included a heart emoji in her caption. Fans adore Priyanka’s photo, which is quickly going viral on the internet.

In an interview, Priyanka Chopra’s mother, Madhu Chopra, revealed that Priyanka and Nick Jonas will reveal the face of Malti Mary after a year. She will be able to share a photo of her daughter when she is one year old. She also discussed how Priyanka and Nick share parenting responsibilities equally.

“Priyanka and Nick have already shared work equally as parents,” Madhu Chopra stated. Priyanka massages her while Nick bathes her and changes her diaper.” Madhu also revealed that she advised Priyanka not to expose her daughter to screen time (mobile, TV, and movies) for the first few years.

Madhu Chopra was plagued by this fear

“I told Priyanka, with screen time at such a young age, your daughter will get thick glasses,” Madhu Chopra said. Priyanka and Nick recently celebrated Malti’s six-month birthday. They posted photos of the celebration to their respective social media accounts. Priyanka and Malti Marie were seen posing next to Nick in one of the photos.