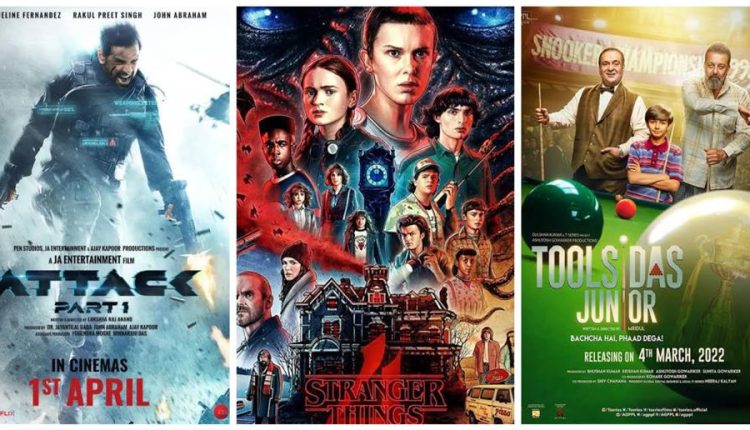 New Web Series: People nowadays spend more time watching OTT content than going to the movies. OTT now offers a wide variety of material. You may watch it anywhere and at any time. Many films and web series dominated OTT last week. There are far too many films and shows ready for distribution at this time. Today, we’ve compiled a list of movies and web series that will be available on OTT this week. Stranger Things is one of the popular Upcoming New Web Series on Netflix. Everyone is looking forward to the new season. This series’ fourth instalment will be split into two parts. Volume One will be issued on May 27, 2022, and Volume Two will be released on July 1, 2022, roughly five weeks later.

The third season of MX Player’s popular web series ‘Aashram (Aashram Season 3)’ has been released on MX Player. The online series stars Bobby Deol, Esha Gupta, Chandan Roy Sanyal, Tridha Chaudhary, and Aditi Pohankar in main roles. Baba Nirala’s impact is strong in every season of the Aashram, and this season is no exception. Prakash Jha, the director of the web series, has attempted to add a twist to the story by introducing a new character, Esha Gupta, and showing the story of Baba becoming God. He ties the series in this fashion, but the slow pace of the serial irritates viewers once more.

The dramatic trailer for New Web Series The Boys Season 3 has been published already. Billy the Butcher is now a super, as well as a trigger, according to this. One thing is certain: the third season will feature new supers, battles, and plenty of action. Stormfront and Becca Butcher died at the end of the previous season. It’s unclear whether this contributed to Homelander’s breakup, but his new psychopathic persona has gained supporters.

Toolsidas Junior is a Sports Drama film directed by Mridul and produced by Ashutosh Gowariker. Toolsidas Junior is Rishi Kapoor’s younger brother Rajiv Kapoor’s final film, which was released on Netflix. The film is also from Netflix Upcoming New Web Series list for watching in this week. You can get an idea about the film by watching the trailer only. The Yash starrer shattered numerous records in the Hindi belt after its premiere in theatres. Within 5 days of its release, the film has surpassed the Rs 200 crore mark. In addition to Yash, Raveena Tandon and Sanjay Dutt have significant parts in this film. The film will be available on Amazon Prime Video on May 27 which is also counted in Upcoming New Web Series available on Amazon Prime Video .