Kabhi Eid Kabhi Diwali: ‘Bigg Boss’ stardom Shahnaz Gill debut in Bollywood is making a lot of news these days. According to rumours, the actress will star in Salman Khan’s upcoming flick ‘Kabhi Eid Kabhi Diwali.’ Although no official statement has been made as to whether she will be working on the project or not. Meanwhile, a photograph of the actress has surfaced, and it has become a hot topic of conversation. This photo of the actress is gaining a lot of attention on social media. 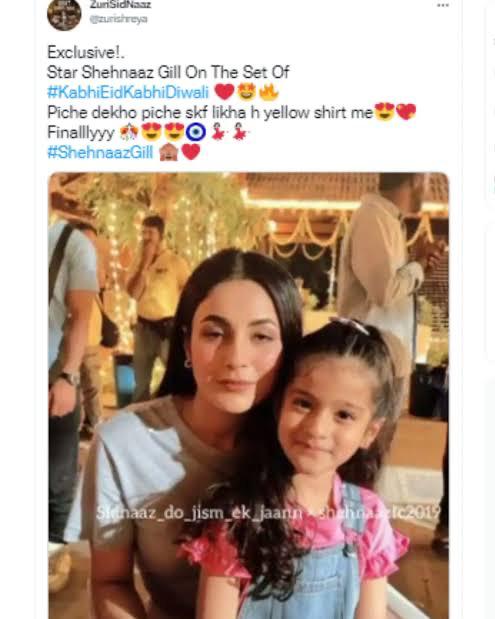 The actress is seen posing with a baby girl in the picture that went viral. Riddhi Sharma, a young artist, is this youngster. This image resembles a movie set. Fans are assuming that the shot is from the set of Salman Khan’s next film ‘Kabhi Eid Kabhi Diwali,’ based on the T-shirt of a man in the background. In fact, the individual standing behind Shahnaz has SKF written on his T-shirt. Let us explain that SKF is Salman Khan’s production firm, and his full name is Salman Khan Films. As soon as this photo leaked, Shahnaz’s admirers became enthralled by the prospect of seeing their beloved actress in a new film. Shahnaz has been paired opposite Jassi Gill in this film, according to reports.

Let us tell you that Salman Khan has been the subject of much debate for quite some time. Every day, more information about the film is released. Shweta Tiwari’s daughter Palak Tiwari has been cast in this film, according to recent reports. Meanwhile, it was previously alleged, based on media claims, that Salman’s brother-in-law Ayush had walked out of the project. This film is directed by Farhad Samji. He directed ‘Housefull 4’ and ‘Bachchan Pandey’ earlier.