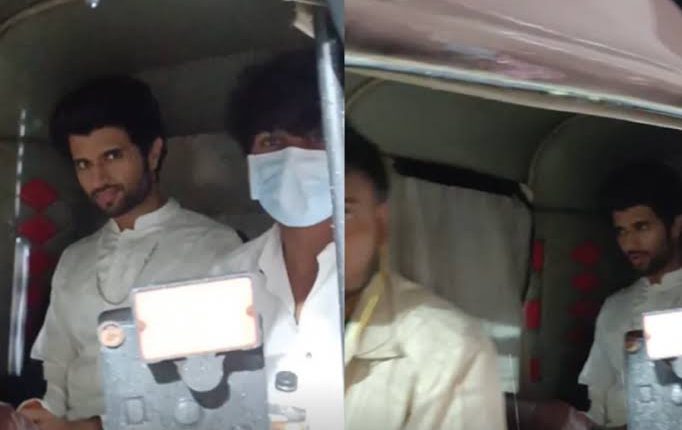 Bollywood Mascot: Tollywood superstar Vijay Deverakonda is currently in the news for his film Liger. His simplicity is admired by all. Everyone wants to catch a glimpse of him. In a short period of time, the actor has amassed a large following. When they see the actor, fans lose control. Recently, the actor was seen wearing slippers during the film’s promotion, and now the actor is seen riding an autorikshaw, which some people praised while others dubbed “fake promotion.”

Why Vijay Deverakonda choose Auto instead of car

Actually, due to heavy rain, Vijay used an auto instead of a car. He arrived by car to promote the film ‘Liger.’ He was not alone in the auto, but he was accompanied by another person. This actor’s simple video is going viral on social media. While some people enjoy this video, others are telling them the truth..

One person wrote, “Brother, everything is a show, and to show off auto, train, slippers.”

Another user commented, “What a false advertisement.”

Dancing in slums of Mumbai
Wearing simple outfits, chappals
Travelling in local trains
And now this ✨

Rowdy dedication towards his character played in the movie ❤️@TheDeverakonda 👑
8 Days More To Witness All His Work #VijayDeverakonda || #LIGER #LigerHuntsFromAug25th 🔥 pic.twitter.com/eqacHyhaV3

This is not the first time Vijay Deverakonda has done something similar, even before he won people’s hearts with his simplicity. Vijay arrived at a film-related event wearing slippers. These were simple slippers for wearing around the house. Ranveer couldn’t help but smile when he saw his simple style at an important event like the trailer launch. In a crowded room, the actor directed everyone’s attention to Vijay’s slippers, and everyone laughed at him. His look quickly went viral on social media.