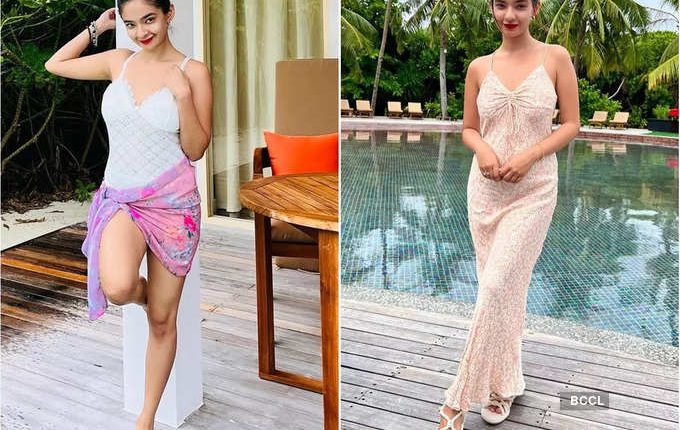 Nikki Tamboli and Anushka Sen, stars of Khatron Ke Khiladi, are currently giving us fashion goals with their social media lookbooks. As people who use the internet, celebrities frequently present us to their various fashion moments, and this time it’s something a little too extravagant.

Nikki Tamboli looked stunning in an all-white ensemble, which included a white bralette and white track trousers, as well as a blonde makeup look.

Anushka Sen shared a Picture a photo of herself posing under neon lights in a white bralette and denim pants, looking sassy and sensual.

Internet Wala Love and Devon Ke Dev…Mahadev are TV series in which Anushak Sen has appeared. She starred in the period drama Lihaaf: The Quilt and a short film called Sammaditthi. She had a lead role in the television serial Apna Time Bhi Aayega in 2020, but she departed after three weeks. She’s also participated in a number of music videos, the most recent of which is Chura Liya.

She was evicted in the seventh week of the stunt-based reality TV show Fear Factor: Khatron Ke Khiladi 11 in May 2021. She was the show’s youngest contestant at the time.