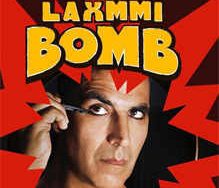 Akshay Kuamar’s Laxxmi Bomb Release Directly On OTT Platform: In this coronavirus pandemic, filmmakers are gearing up for a direct to OTT release. And now we learn that Laxmmi Bomb, starring Akshay Kumar and Kiara Advani in the lead role, is all set for a direct to digital release in June.

According to some reports, Akshay Kumar, Vijay Singh from Fox Studios and producer Tusshar Kapoor along with the officials of Disney+Hotstar have been communicating over video calls for last 3 weeks, and it was only on a meeting on the evening of May 4 that everyone reached a common ground to get the film to release directly on the OTT platform.

According to the source close to the development, Everyone has given a green signal to release film directly on OTT. “The principal shoot of Laxmmi Bomb was wrapped up in November last year, with some patch-work and reshooting done more recently in February. Director Raghava Lawerence is currently working on the final edit and post-production of the film from Hyderabad, while Akshay is expected to send his dubbing tapes digitally to the director in a couple of days,” the source added. However, there is no official announcement yet.

The Horror comedy flick is a remake of South film Kanchana, written and directed by Raghava Lawrence. Apart from Akshay and Kiara, the film also features Tushar Kapur, Sharad Kelkar, and Ashwini Kalsekar.